What can Tameflow learn from the growth of "Wardley Mapping"?

I’ve been wondering how the adoption of “Tameflow” might unfold over the next few years. I thought that some insight might come from Simon Wadley’s musings on the development of “Wardley Maps”.
the past few years I have been watching how “Wardley Mapping” has grown to an event, last year, London with over 600 people attending.

There is no time or adoption axis on the evolution curve, only ubiquity (to its ubiquitous market) versus certainty. It may take ten years or a hundred for something to make its journey from genesis to commodity. It may become a commodity when 2% of the population own it or everyone has three. However, regardless of this, I know the path it will take. What causes things to take that journey turns out to be simple competition represented in two forms: -

Demand competition and the consumer desire for anything which is useful or makes a difference or creates an advantage is the driver for ubiquity i.e. anything useful spreads.

Supply competition and the desire of providers to supply an activity to consumers is the driver for feature completeness and improvement of an activity. For example, an average car today includes as standard numerous things that were once novel feature differentiations such as electric windows, air bags, an alarm systems, a stereo, seat belts, roll bars and windscreen wipers. It’s the desire to differentiate and to make things better combined with competition and copying that drives things to become more uniform, more complete and more certain.

As an activity [Tameflow] evolves, each more evolved version will diffuse from early adopters to laggards through its own applicable market. That market can and does grow as the act becomes more accessible to a larger audience. For example, with the first computing products you had early adopters and laggards within a relatively small market.

Mapping seemed to have merit and I had a purpose, to teach everyone who would listen. Alas, it was 2008 and I was fast running out of cash. I would have to turn mapping to a profit one way or another…

Questions for the Tameflow community

What is the market for Tameflow?
Who are the early adopters in that market?
What are their users needs?
What alternatives/subsitutes do those early adopters have to Tameflow?
What “plays” might the tameflow community use to get ahead in the current context? 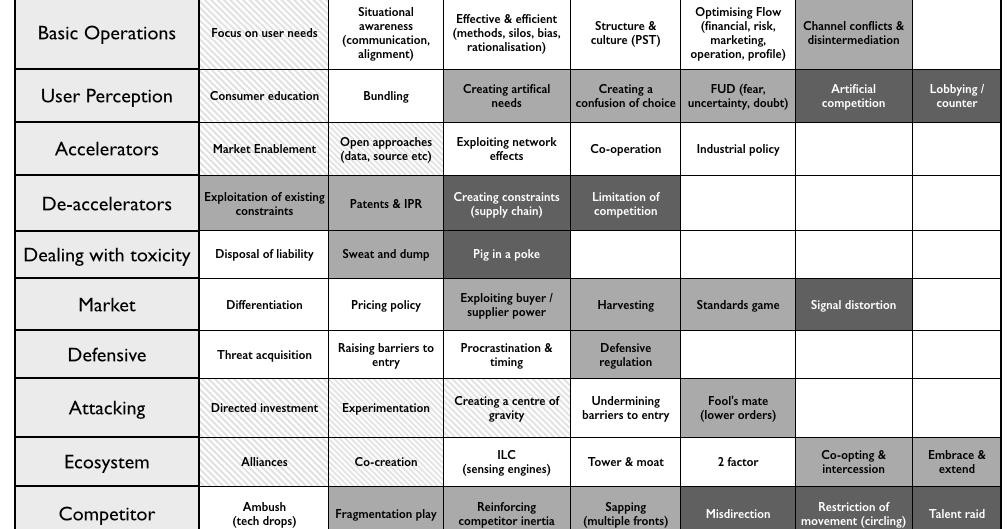 On 61 different forms of gameplay

The rants and raves of Simon Wardley on Evolution, Technology, Economics and Business

FYI A link a “Using Wardly Mapping for Strategy” Syllabus

Somewhat related to this, I came across this post: Hollow Practices and Evolution.